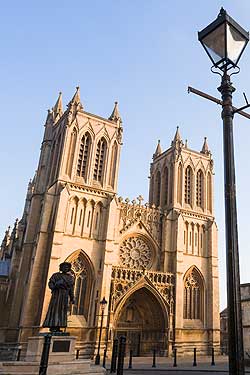 The West's dominate city, Bristol has a long and eventful history with it prosperity linked to its port and sea connections offering trading opportunities with Iceland, Ireland and France, leading to John Cabot's voyages to North America and further development of the colonies established there and later included being a part of the 'triangle' of ship movements that were involved in the slave trade. Later industries and development included notable contributions from Victoria engineer Isambard Kingdom Brunel who oversaw the Great Western Railway connection to London (including Bristol's main rail station, Temple Meads) along with designing Bristol's iconic Clifton Suspension Bridge and the SS Great Britain, and the construction the the first Methodist Chapel by John Wesley and modern engineering which has seen Concorde and the development of aerospace in Bristol, all of which now form just some of the attractions available to visitors to the City today.

Bristol's close proximity to Bath means that day trips can easily be undertaken by local trains or buses however if you are taking a tour to South Wales some sights such as the Suspension Bridge can be included in the journey.

Bristol can be visited either on one of Celtic Horizon's suggested tour routes or build it in to a custom tour around your own requirements - contact us for details and prices.

Please note that we only offer journeys and tours that are exclusive to your family or party: we do not operate scheduled shared tour bus services.